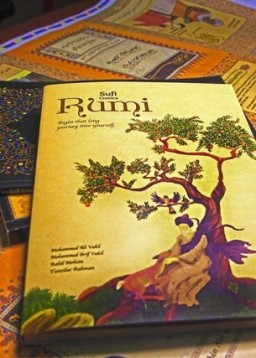 “There is a life-force within your soul, seek that life. There is a gem in the mountain of your body, seek that mine. O traveller if you are in search of that, don’t look outside, look inside your self and seek that.” ~ Rumi
Rumi’s words have been a source of solace to my soul for a very long time. I grew up listening to my wise and philosophical dad quote Rumi on many occasions and then when I did actually grow up, I began to slowly understand the depth of his words. To this day, his words, his philosophy on all things love and life hits home for the heart centred Sufi girl in me.
Today I have a treat for all Rumi lovers out there…its an amazing NEW comic book depicting the life and wisdom of Rumi.

Sufi Comics: Rumi is a graphic representation of the 13th-century Persian poet’s life and 11 stories based on his work. Each story is followed by sacred verses from the Quran and hadiths, inscribed in Arabic by the leading Indian calli­graphy artist Muqtar Ahmed.

Sufi Comics-RUMI was the most magnificent visual treat I’ve had in a very long time. I loved the colors, the style and most of all the authenticity with which Rumi’s wisdom has been given life in this book. I LOVE the book and am going to enjoy introducing Rumi to my little girl just as my dad introduced Rumi to me. I’m glad I have a tool in the form of this Rumi comic book to do so.

I was curious to know how the creators of this beautiful masterpiece came to create it. So below is an interview with Mohammed Arif Vakil and Mohammed Ali Vakil the creators and geniuses behind Sufi Comics RUMI :

Q) What sparked the thought of creating this insightful book?

A)Somewhere in the back of our minds we wanted to do a book on Rumi. The thought crystalized when we were hearing a lecture by Seyyed Hossein Nasr in which he was talking about Rumi.

Knowing that Rumi’s poems are often stories that have a spiritual message, we felt it would be perfect for doing a Sufi Comics book; as it easily lends it self in presenting the comics using illlustrations.

Arif talks more about why we took up this project. (http://www.suficomics.com/rumi/new-book-rumi-poems/)

Q) While writing your book, what was the most challenging part? Was there a time you wanted to just give up?

A) When starting a project like this, in the beginning it feels very daunting. There’s so much to do, the research work, sketching the thumbnails, inking & coloring, proof reading & production. At times it feels it’ll never get done. But a few of things helped us get through:

*Setting a hard deadline. We wanted to launch the book at Comic Con Bangalore, which is in September 2014. We had to have the book out by then, no matter what. With a clear end date, we automatically gave priority to the book over other commitments.
*Focus on your strengths. Luckily I had a great team to work with on this project, each person had their own strengths. Instead of one person doing everything, we divided the work based on individual strength of each team member.
*Do one thing at a time. Instead of thinking of ‘big tasks’ like “color the book”, think of simple next actions like ‘select colors for one page’. Big tasks paralyzes the doer, but small tasks makes it easier.

Our original plan was to have a 400+ page book containing 40 poems of Rumi in graphic format.

So we didn’t give up, but we did trim it down 🙂

Q) How much research went into writing the book?

A)The translation of Rumi’s poems were selected from Andrew Harvey’s “Teachings of Rumi”. But we needed the original Farsi for two reasons:

1. To include the original Farsi along with the English text
2. To understand the poem in it’s original language, so that we can best represent it in illustrations.

Tanzlur Rahman from our team was the expert who knew Farsi. He pulled out the original text and explained the poem to the rest of the team.

Our book begins with the origins of Rumi, so Tanzil had done some research in the life of Rumi. There were 2 different versions of Rumi’s meeting with Shams Tabrizi. In our book we’ve blended both versions in one story.

Q) Which is your most favorite chapter from your book and Why?

A) It’s difficult to chose a favorite, but the poem “Keep your Dragon in the Snow” stands out. It’s a poem that reminds us to be always watchful of our lower self.

I really like the analogy used in the poem, ie the lower self is like a dragon. If we are unaware if it, it will take control of us and our decisions, leading to wrong actions & regret.

Rumi explains that self discipline is the key to keep our dragon in the snow.

Q) Who would benefit from this amazing book?

A) People who’ve read and enjoyed Rumi’s poem will probably enjoy this book the most. They’ll get to experience Rumi’s poems in a new way.

Q) Do you have a message for the readers of your book?

A) Well I’d like share two quotes that I came across recently that have helped me face challenging situations. I hope it helps your readers too.

“Every person you interact with, pretend they’re an angel whose sole purpose is to teach you a lesson to grow and reach your maximum potential.”

“Life consists of two days, one for you and one against you. So when it’s for you don’t be proud or reckless, and when it’s against you be patient, for both days are a test for you.” Imam Ali (as)

Thank you Arif and Ali for this insightful interview.

This book is not just any book…its a masterpiece! I urge each and everyone of you to grab your copy and enjoy Rumi’s wisdom is this spiritually enhancing and visually enriching form.

♥♥”Thank you SO much for reading! Please, share this article on your favorite social networks. Every share, like or tweet makes me reach more people who need a positive healing nudge in their lives. I truly appreciate you!”♥♥

GET YOUR ‘POSITIVE HAPPINESS GOODIES’!!! Get the latest articles(FREE) as soon as they are published, by Email OR RSS.PLUS if you are an Email Subscriber, You get the Positive Living Handbook+My Ebook “The Best of Positive Provocations”+ “Your Self Healing Starter Kit”. Come Join the facebook community & follow me on Twitter and Google+ for Positive Provocations Everyday!

Other Positive Articles you will love:

Welcome to my little piece of Heaven! I'm Zeenat Merchant Syal ~ Counseling Psychologist, Spiritual Counselor, Motivational Speaker, Naturopath, Holistic Healer by passion and profession! I strive for a happier, more loving and positive world in me and around me. On this blog I share my heart, my soul and all that I know to help YOU heal completely.
I hope the articles here motivate and inspire you to be the best and happiest you. Learn More

Pains are meant to come into our lives to reach us difficult lessons. To make us wiser for the future. Pains change us... If we learn from them we are growing and if we don't learn from them, we keep repeating those same pains in cycles. So decide to contemplate and make the positive changes in your life. Your happiness and your healing depends on it!
Let go of the Clutter ~ Letting go of material things that do not bring value to your life can be incredibly liberating.
Good Karma ~ If you would not like it done to you, do not do it to others. Protect yourself & your karma.
Share Your Burden ~ Understand, that is you are not speaking it, you are storing it. And that is a heavy burden to carry. When you share the burden, it gets easier to live.

No content on this site may be used in any fashion without written consent from Positive Provocations.